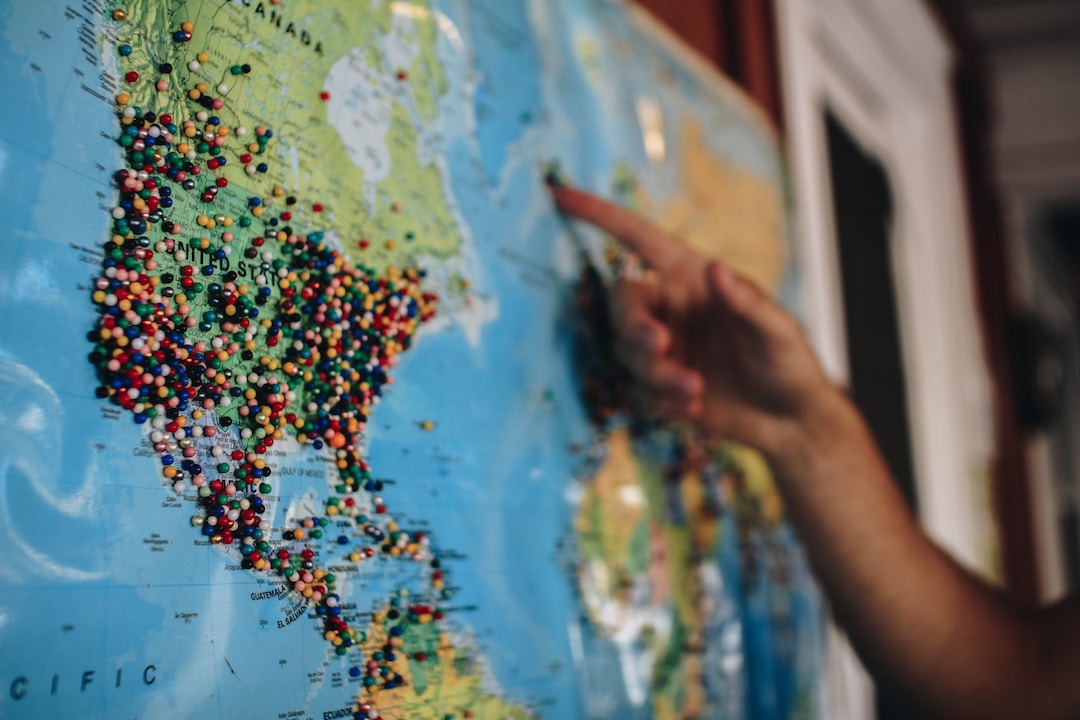 This is my first and only short story. I wrote in 2011. Published it on the blog under another name in 2012 and have since made a number of edits. I love this little story. I love Emeline and Jimmy. I hope you do too.

Emeline unrolled a map of North America and hung it next to the others in her bedroom. She uncapped a new, black marker and wrote “Autumn Foliage” at the top, just above British Columbia. Using a meticulous system of pushpins, journal entries, and stickers, Emeline tracked various elements of the natural world. The greening of the grass in Spring. The turn of the leaves in Autumn. The rate of snowfall at Christmas.

October was Emeline’s favorite month. She checked the weather reports and looked up images on the internet. Each day brought a new burst of color and another group of red, yellow, and orange pushpins on her map. Each day another set of stickers and records entered in her journal. From prior years observing the forest around her farmhouse in Southern Maine she knew the colors began in August. She also knew that weather conditions in the Spring and Summer had a direct effect on how much good color they would see.

This year had been perfect. Not too hot, not too cold. Not too wet, not too dry. The Farmer’s Almanac predicted the most spectacular Autumn in a century. Everyday Emeline took a walk in the woods behind her house, looking for signs of October. She looked for it in the cooling night air and the slow disappearance of mosquitos and lightening bugs.

In the August before 5th grade Emeline saw only green. “Perhaps I am too early,” she thought, “I’ll come back tomorrow.”

And the next day and the day after that. She went to the woods every day for a week and for the week after that.

By September school had started, the air cooled, the lightening bugs no longer flickered in the twilight, and a fine mist settled on the morning air, but Emeline hadn’t put a single red, yellow or orange pushpin on her map.

The first report aired on Channel 5 News at 6, then again at 10:30 and 11. Pictures of green flooded social media. It was the lead story on all of the major networks.

“Good Evening. This in from New England. A strange phenomenon which scientists cannot explain. The leaves, usually sparkling with fall color by now, have not begun to turn.”

Each night stories came flooding in. In Montana, the Dakotas, Colorado, the leaves had not turned. Meteorologists, climatologists, biologists, could only speculate—global warming, climate change, polluted rivers. None of it made sense.

By mid-October Emeline gave up hope for a colorful fall. She watched to see what would happen in the South, where the leaves don’t reach their peak until November. But in Virginia and Carolina, Tennessee and Alabama, Texas and the High Desert, all that remained was green.

The night of the President’s first address on the subject, her parents invited friends over to dinner. Emeline wasn’t too pleased about this because it meant that Jimmy was coming too. Jimmy was a year older than Emeline. They’d been friends and playmates when they were little but Jimmy didn’t like science and teased her about her maps.

“Now, James Holden, you behave yourself tonight. Be nice to Emeline. Don’t tease your friends,” his mother said as they walked to the front door.

He kicked the dirt.

Emeline picked at her plate of chicken and mashed potatoes while the adults discussed the latest collapse of the Red Sox pitching staff, the unusual number of people attending Sunday services, the bushels of apples they’d picked, and the run on canned goods, water and ammunition down at Foster’s Provisions.

“Emeline, how are your maps coming this year?” asked Mr. Holden. “How are you handling this leaf situation?”
“Well . . .” said Emeline, pushing her glasses back up the bridge of her nose.

Across the table Jimmy adjusted his pretend glasses and took pretend notes in his pretend notebook while Emeline explained her new tracking method. His mother tweaked his ear.

After dinner Emeline helped her dad with the dishes then joined her mother and the Holdens in the living room. Jimmy lay on his stomach, chin propped up in his hands. While he didn’t like science, he did like the President and wanted to hear what she had to say. Emeline sat on her knees, notebook and pen in hand.

The President didn’t say much. She and other world leaders had listened to the advice of climate experts and come up with a plan should one be needed. Though what that was or why they would need one she didn’t say.

“In this time when we all feel anxious or afraid I urge you: Count your blessings, keep doing the work that makes this country great. God Bless You and God Bless the United States of America. Good night.”
“Well, that was a whole lot of nothing,” said Emeline’s father and turned the channel to the post speech analysis.
“Shut it off,” said her mother. “Let’s just enjoy the rest of our evening.”

In all other ways October was just as it had always been. The sky was clear and bright, the air crisped, and the morning mist thickened. The squash and apples and pumpkins grew plump and abundant in markets and road side farm stands. Chrysanthemums bloomed. Acorns crunched under foot and the evening light fragmented like stained glass. Front porches were decorated with corn husks, hay bales, and scarecrows. Stores across the country stocked and sold cinnamon spice scented candles, plaid tablecloths, wreaths and garlands of artificial leaves manufactured in China—where the leaves had also not turned.

To the surprise of all, people who’d been hoping for years to see New England in the fall kept their travel plans. Tourist trains went up and down Mt. Washington. Kayakers navigated the Penobscot. Thru-hikers on the Appalachian Trail who started the summer in Georgia reached the summit of Mt. Katahdin sporting T-shirts that read, “I hiked the AT so fast it stayed green.” At Walden, people sat dazed on the shores of the pond, wondering what Thoreau would think of this green October.

As Halloween approached pumpkins were carved into jack-o-lanterns. Garbage bag ghosts and spiders hung from the trees. Jimmy was excited about candy and wanted to trick-or-treat as a pile of leaves but his mother said that was in bad taste. He shrugged and went as a skeleton.

Emeline did not enjoy Halloween. Not only had she dressed up as Marie Curie and had to keep explaining her costume, but the trick-or-treating was accompanied not by the twisted, naked tree branches pointing like a witch’s finger to the moon, but by an eerie canopy that blocked the stars.

A week into November the weather turned cold and stayed that way.

Just as it always did.

Emeline sat on the floor by the fireplace, her head resting on the hearth.

“Emeline?”
“Yes.”
“What are you thinking about?” her mother asked.
“I was just wondering. The leaves didn’t turn, but everything else seems to have happened right on schedule. We had Halloween, but it wasn’t the same. Thanksgiving isn’t much more than a meal and a parade, but what about Christmas?”
“Oh, you can’t stop Christmas,” said her mother.

In December, the anxiety over the leaves was channeled into a new fervor for the Holiday Season. More twinkle lights were stapled to houses; more electric candles placed in windows. People who usually put up an artificial Christmas tree opted for a fresh Frasier Fir or Scotch Pine. The taller the better. Christmas carolers went door to door. Church pews were full all through Advent. The news stopped reporting on the strange situation with the leaves.

On December 24th, Emeline left a plate of milk and cookies by the fireplace even though she knew she was too old for that sort of thing. She awoke the next morning to a blanket of snow, presents under the tree, a fire in the hearth, and baby Jesus in the manger of their crèche.

And so, the holidays came and went and soon the new year arrived. Emeline tracked the snowfall. It started right on time and followed all the average records. She wondered how the delicate maple leaves could bear the weight of the heavy snow.

In March, the ice thawed and Emeline rolled out her “Daffodil and Other Spring Flora” map, though she knew it would be a while longer before the little pockets of sunshine poked up through the muddy earth. But poke through they did and soon the April showers brought May flowers.

“And you know what May flowers bring?” Jimmy asked.
“What?” said Emeline.
“Pilgrims!”

Spring bloomed. June warmed. July filled with swimming, Bar-B-Qs, and Red, White and Blue. For a few precious days, the world forgot to worry about the leaves. But as the August heat reached its breaking point and the last lightning bugs of summer lit the night, anxiety returned.

Emeline bought a new map and pulled last year’s unused box of multicolor pushpins from her desk drawer. She hung the map on the wall next to the others, gathered her backpack with notebook, pen, and other necessities of science, took a deep breath, and set out on her daily walk.

To her dismay Jimmy, who’d gotten a little taller over the summer, was waiting by the trees.

They walked deep into the woods, Jimmy laughing and telling jokes all the way. To her surprise she found him funny. His jokes were still pretty dumb, but at least he wasn’t teasing her. She was even more surprised to find that she’d been following him.

When they came to a stream Emeline stopped. She was tired of hiking and wanted to observe and to record. She removed her backpack and sat down on a rock.

He shrugged.
Emeline took the notebook and pen from her pack, opened to a blank page and looked out over the water, scanning the trees.

Across the water, through the tangle of oak and Hawthorne, was a single, yellow leaf.

He reached into his pocket and handed Emeline a pushpin.

Photo by Kelsey Knight on Unsplash

← Angry
The Season of Many Hats →

This site uses Akismet to reduce spam. Learn how your comment data is processed.

Happy First Day of Summer and International Yoga Day! Next Zoom class Thursday 6/23 @abbeyofthearts (Link in comments). How many people do you think are practicing Down Dog at any given point during the day? I don't know either but I guarantee it's more than just you! It's so easy to feel alone on the mat and solo attention is important. But it's also good to remember that we practice as part of a vast network of people across the planet moving and breathing together to find healing, rest, growth, and transformation. This work is not only for ourselves. In practicing self-care with one another, we build our capacity to act as agents for compassionate action in the world.
@lindacozz are these from your garden? Whatever their origin, they are beautiful! Thank you and St. Paul’s Care and Share for the cheer.